Roughly speaking, this is what Patriots owner Robert Kraft said in his epic meltdown over the NFL's decision to uphold Tom Brady's suspension:

Things to Remember About DeflateGate

In No Particular Order:

Labels: DeflateGate, Get over it, NFL, Tom Brady

And That Might Be A Wrap, Cole Hamels Edition

Congratulations to Cole Hamels for throwing a no-hitter against his possible future employer, the Chicago Cubs, yesterday. Almost certainly the best pitcher the Phillies have developed since Robin Roberts (who else? Bruce Ruffin? Marty Bystrom? Tyler Green?), Hamels is wasted on a Phillies team that's going nowhere and won't be ready to contend for about another 3 years. He's also cost-controlled, with 3 more years left on his contract, and he's pretty durable, all of which make him an obvious candidate to be moved.

Confession: I Am Fascinated By The 76ers

The Philadelphia 76ers are awful. As they currently stand, they are a horribly constructed basketball team with an overabundance of tall men who will not play basketball for them this season, a veritable armada of D-League guys soaking up second half minutes, and nobody on the roster who can distribute the ball without tripping over it. They won 18 games last year. This year, with former top pick and potential franchise player Joel Embiid getting knocked out for another year by a broken foot and the very real possibility of JaKarr Sampson making the roster, they may be worse.

File This One Under Irony

Mavericks owner Mark Cuban is throwing tantrums all over the internet over DeAndre Jordan's decision to back out of an oral deal and re-sign with the Los Angeles Clippers for roughly equal money. (NBA salary money is not real money, and then you get into state income taxes and the sorts of insane clawbacks that numbskulls like Scott Walker are trying to implement and, well, forget it. Suffice to say that the Jordan family will probably be doing just fine for a long time regardless.)

Mavericks owner Mark Cuban is, in essence, mad at Jordan for being selfish and not honoring his oral agreement.

One of Rand's best-known works (besides "I will bang your much younger boyfriend because Philosophy") is entitled "The Virtue of Selfishness".

The sports world has lost its collective mind over the recent pas de deux performed by DeAndre Jordan with the Dallas Mavericks and Los Angeles Clippers. There were hijinks, there was low comedy, there are people coming out of the woodwork to offer their hot takes on the ethical ramifications (It's NBA free agency. Ethics need not apply) and there's a whole lot of money. But the things, most people mistakenly view this as a basketball story about a guy who agreed to a deal with one team but regretted it and was talked into going back to his old one, albeit for a giant pile of smackeroonies.

Dear People Who Are Being Paid To Write About The MLB All-Star Game Roster Selections:

Should A-Rod be an All Star? 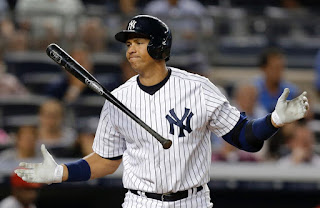 The guy you love to hate is back...and this time with legacy on his mind.

Alex Rodriguez served his time for his PED usage...again, but has turned out to be a very pleasant surprise for the Yankees this season. Does that make him an All Star?

Read more »
Posted by Dustin Clingman at 10:00 AM No comments:

These two statements are both true: