Is it just me, or do the sportswriters of the world pre-write this column every year:

"Trade Deadline Proves a Disappointment"
Despite a flurry of rumors, the only deals that happened around yesterday's deadline involved minor players, blah blah blah.

You get the same thing every year for baseball, basketball, and hockey. Football's exempt because the salary cap rules are so arcane that nobody in the NFL gets traded anyway, at least for anything other than draft picks and space under the Bengals' arrest limit.

This would be, of course, because the trading deadline is often a non-event, pumped up into a story by sportswriters who like playing GM by proposing deals (Guys, we call this "fantasy baseball" and get it out of our system in groups of ten to fourteen. You might want to give it a shot sometime.) That's not to say that there aren't genuine rumors floating around, or that there isn't good investigative work being done, but there are way too many "Hey, none of the ridiculous deals I proposed happened!" pieces.

Most of the time, they're not going to happen. In part, it's because so many trades get proposed every deadline that it would be mathematically impossible for more than 12% or so to go off, and in part because a GM's legacy is in large part defined by the deals he makes. Make a bad one, and the media - the same guys who were howling for some could of action at the deadline - will crucify them. With that in mind, it's no surprise that most GMs are slow on the trigger, and don't make deals just to satisfy the feeding frenzy of the minnows (Jim Bowden, you're excepted.)

So when the baseball trade deadline rolls around, enjoy the speculation for what it is - what-ifs, and nothing more. And when the day after "Nothing happened!" articles get written, you can ignore them. After all, you've read them before.
Posted by Unknown at 5:14 PM 1 comment:

As noted by Derek Zumsteg (thanks, Jason), baseball quietly let a few rules changes escape while the media was distracted by the imminent threat of Barry Bonds fighting Mothra in downtown Tokyo. The changes don't seem world-shattering at first, but a couple have the possibility to alter play drastically.

One of the new rules - the automatic ten game suspension for doctoring baseballs - can be seen as a direct reaction to the Kenny Rogers incident during the World Series. More specifically, it looks like a response to the popular wisdom that Tony LaRussa didn't call Rogers on it because his own pitchers were laying down enough gunk on the balls to have them eventually abducted by steroidal dung beetles. This way, when the first "Hey, Kenny's on the mound again! Guess what he did last year!" story of the year gets written, baseball can point to its new anti-cheating policy and claim to be doing something about it. Whether anything needed to be done, of course, is a moot question. Scuffing baseballs has been part of the game since Burleigh Grimes hocked his first loogie, and that sort of gamesmanship - as distinct from cheating - is part of the sport's tradition. Besides, I strongly suspect no manager in his right mind is going to call for an inspection of an opposing pitcher's ball, lest his guys be inspected in turn. That leaves it to the umpires to notice if the ball suddenly turns the color of bad chili and handling like a Fokker triplane, and I strongly suspect most of them won't bother.

More interesting are the "twelve seconds between pitches" and "keep your ass in the batters box" rules. Essentially, they've had enough of human rain delays, so in theory, the umpire now has the discretion to ladle out pitch calls on lollygaggers. Take too long to deliver? Automatic ball. Of course, if this means that umps are watching their stopwatches instead of, Deo prohibe, the game, I'm not sure that it actually improves things. To be honest, the whole "make games shorter" push still blows my mind. The ticket costs the same regardless of how long the game takes - why not get more for your money?

The rule about players not being able to chase foul balls into the dugout is actually commonsensical. Sooner or later someone's going to do a face-plant down the dugout steps and get a few hundred sunflower seeds jackhammered into his noggin by the concrete floor. The "Flip over the railing" catch is a staple of highlight reels, but sooner or later someone's going to do themselves a real injury by Mo Vaughning it down the dugout steps, and I'm of favor of anything that reduces the chances of that.

Similarly, catchers no longer have to chase batters who wander toward the dugout in case of a dropped third strike. This still leaves plenty of room for Pierzynski-esque shenanigans, but cuts down on the number of times we have to see catchers running per game. That, my friends, can only be a good thing. The fewer times a year I see a Molina stampeding toward an unsuspecting batter, mitted arm held out in best Frankenstein pose, the happier I am.

Frankly, most of the rules changes strike me as unnecessary, easily replaced with a little common sense. The one really tricky one is the pitch timing, and I have a hard time believing that will be enforced past, say, Mother's Day. If it is, however, it's probably going to have the exact opposite effect of its intention. Pitchers who work faster keep their defenses on their toes, or so we're told. Livelier defenders = better defense = precisely not the sort of increased scoring the owners seem to think sells tickets. Once they realize that, all bets - and all enforcement - will be off.
Posted by Unknown at 9:25 PM 5 comments:

...do you know where your pitchers and catchers are?
Posted by Unknown at 12:07 AM 3 comments:

Some Final Thoughts on the Football Season

If Marlon McCree had the sense God gave a paper clip, would we be hailing Marty Schottenheimer as a genius right now? On the other hand, did the Patriots have the Chargers so spooked that McCree felt compelled to try to add to that oh-so-fragile 8 point lead San Diego had going into the homestretch by running the interception back? If so, that may be the single most impressive piece of mental intimidation I've seen on a football field.

There is no quarterback controversy in Philadelphia, apart from a trumped-up media chewtoy intended to fill the time between the end of the Eagles' season and the start of spring training. The Flyers are near-historically awful, the Sixers are awful and boring, and Drexel is beating the pants off the Big Five in college hoops. No wonder they want something else to chew on. Seriously, though, ask any Eagles fan (and by Eagles fan, I mean Eagles fan, not "human-shaped sack of wet sand who would sell his childrens' internal organs for five minutes of air time on WIP") and they'll tell you one thing: McNabb is our quarterback, but he'd damn well better be handing the ball off more next year. End of story.

The Chiefs had better start developing their next ungodly good running back right about now. I'm sensing about two years' worth of tread left on Larry Johnson's tires. And how scary is it that Christian Okoye's kid played in the North-South game?

Possibly the single most terrifying item in the latest issue of ESPN was the discussion in the "Mike and Mike" page - this is what you call "vertical integration without lubrication" - wherein the estimable Mr. Golic notes that the NFL offseason is perfect because it's broken up by important events like, and I quote, The Combine. To which I say, if watching young men line up in their shorts to be weighed, measured and prodded counts as an event anywhere outside of Chippendales auditions, it's time to abandon the country to Mel Kiper Jr.

Even money says Terrell Owens is not in Dallas by the start of training camp. More money says that the NFC East is a two-team division next year - Philadelphia and Washington - and Tom Coughlin is gone by midseason.

The New England Patriots are not the Yankees. They're the Atlanta Braves - winning without superstars, plugging role player in after role player, and maintaining remarkable consistency.

Wild predictions for next year - the Steelers and Bengals will be back in the playoffs. The Saints, no longer buoyed by a last-place schedule, won't be. And the Cardinals will continue to be awful. Then again, that's not really a prediction. It's a more of a rerun.
Posted by Unknown at 11:24 PM 1 comment:

...how did we get from "Any NFC team who dares show up is going to be slaughtered" to "The Bears are going to win this thing going away" as the conventional wisdom? 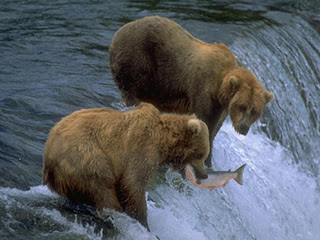 Brian Urlacher (left) and Lance Briggs' Unique Super Bowl Training Regimen
Despite the fact that I, like 99% of the people out there commenting on this have no bloody idea what they're talking about (and that includes Terry Bradshaw, Sean Salisbury, and Tony Siragusa), have no idea what the hell is going to happen, I still feel compelled to make some form of prediction. So here it is:

Unless Tank Williams goes all Last Boy Scout on Joseph Addai, the Bears' lack of a defensive line will prove their undoing. The Colts, inspired by Steven Colbert's dire warning that bears are in fact the greatest threat facing this country, will rise to the patriotic occasion and win a 28-17 game that isn't as close as it looks, due to no fewer than six missed field goals on the part of the Colts. After the game, it will be revealed that former official drunken idiot kicker Mike Vanderjagt ambushed Adam Viniateri in the parking lot outside the stadium, knocking him out and taking his place. Unfortunately, the false Viniateri will miss field goals of 24, 27, 29, 34, 35, and 57 yards, the last being attempted after Tony Dungy has A)figured out what's going on and B)instructed his special teams linemen not to block in order to make sure he gets his money's worth out of the upcoming "Roughing the Kicker" call.

Peyton Manning, much to the disappointment of sports talk radio hosts everywhere, will have a solid game, Marvin Harrison will have one touchdown catch, and Rex Grossman will do fine until the third quarter, at which point it will become apparent that the Bob Sanders-led Indy defense cannot be run on effectively, and that Dwight Freeney knows Grossman's name, location, tendencies, social security number, google password, and darkest sexual proclivities. By the middle of the fourth quarter, Chicago columnist Jay Mariotti will have run onto the field in an attempt to tackle Grossman himself in an attempt to prove to his readers that it can be done by anyone, only to be intercepted and eaten by center Olin Kreutz, who, at his listed 292, is a little undersized for the modern game.

Seriously. It's going to happen just like that.
Posted by Unknown at 10:20 AM No comments: